Letter to the Presidential Board in Tromso

As Chessdom.com informed yesterday, Azerbaijan have secured the first half of the Candidate matches. They have already transferred the initial 150,000 EUR to FIDE account and have signed contract with the local player Shakhriyar Mamedyarov.

Among the locations discussed for the second part of the Candidate matches is Kazan (Russia). This caused a sharp reaction by Veselin Topalov, who sent an open letter to the Presidential Board in Tromso, stating, “I would like to declare that I would not participate in any stage of the cycle for the World Chess Title that takes place in Russia. The venue of Baku was rejected by Aronian and this looked natural for everyone. I believe it is logical to ask, if I play any matches in the future, (especially against Russian GMs) , that they should be outside of Russia.”

Here is the full text of the letter. 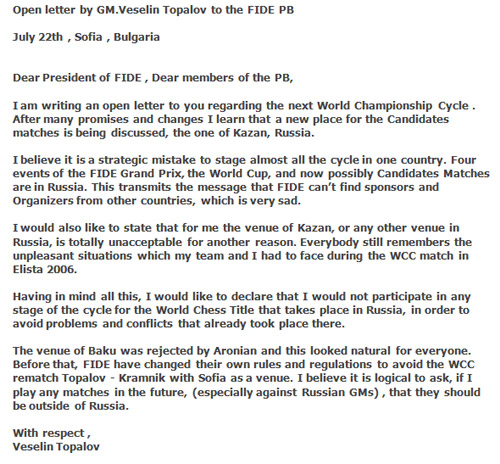