The match Topalov – Anand will take place in Sofia in 2010. It will consist of 12 games with classical time control. In case of tie, additional four rapid games will be played.

The letter from Bulgarian PM Boiko Borisov was decisive factor in favour of Bulgaria. FIDE President Kirsan Ilymzhinov accepted the guarantee and then the proposal passed with unanimous vote.

Chessdom.com presents you exclusively the letter by the Prime Minister of Bulgaria Mr. Boiko Borisov. 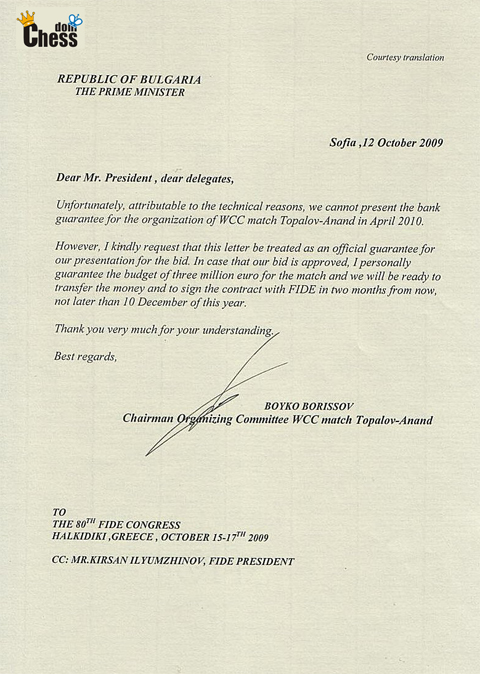 Veselin Topalov and Vishwanathan Anand did not comment on the match itself. Topalov will have his first interview during the ETCC in Novi Sad. Anand was invited to discuss the contract options in Novi Sad, but at the same time he has a rapid match with Karpov and chances are he will postpone the meeting.

Silvio Danailov said, “We would have been happy if India had presented a better bid. We would have played there, or even the match could take place in both countries, splitting it 50 / 50. However, India had a lot of time and did not present a bid, it’s a pity! India is a large market and Anand is their idol.” Danailov also added, “The fact that the Prime Minister is the head of the organizing committee for the WCC match is a guarantee for fair play”.