On 28th July German the top Grandmaster, Arkadij Naiditsch, unveiled some details about the German Chess Federation in an open letter to all media. As per request of Mr. Naiditsch we are publishing the text here.

The letter continues with Naiditsch describing how he sees the key persons in the German Chess Federation – “Let me now become a bit more direct, because I would like to single out a few people with whom I have had to deal with personally.”

There follows a letter from Prof. Dr. Robert von Weizsäcker (dated 29th June, translated by Chessvibes) where he is asking the players “to reconsider your position and accept the same terms as two years ago.” Otherwise the players would be suspended from receiving Federation’s support. Naiditsch goes on to clarify: 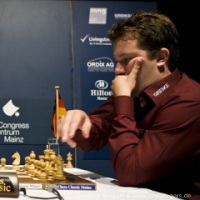 Chessdom has contacted the other two candidates for ECU Presidency, Mr.Silvio Danailov and Mr.Ali Nihat Yazici. Both were very moderate in their comments.

Ali Nihat Yazici: I like the quality of the Campaigns in Europe on the contrary to what happens with the FIDE elections from Karpov’s side. We have created our Campaign program, our website and we are visiting all federations. We work very hard to convince each federation to support our group and our Campaign program. We do not talk only about elections but also how we may realise our dreams after the election. Based on the communication we have with federations, we are optimistic that we can win the elections on the first ballot, because everybody knows what I have done in my federation, Europe, and FIDE.

Silvio Danailov: I am very happy with our Program and Campaign so far. Our team is working very hard and we are optimistic regarding the elections.

Q: Did you read the interview of Mr.Arkadij Naiditsch about German Chess Federation?

Ali Nihat Yazici: Yes, I read it and it is a pity. However, this is not our business, as it is an internal problem of German Chess Federation. We will not touch such national issues. We are sure European delegates will evaluate everything and will choose the best candidate. We may say only that when we are managing European chess, we will solve such financial problems for all European federations, including the German Chess Federation. Our objective is to find new financial sources for the federations, and we are going to help all Federations, irrespective of their size or financial status. It is time that the leadership of Europe works for all the continent and we are going to do so. In a maximum of 2-3 years, such problems, like the one which is facing the German Chess Federation will not be any more an issue. As we have mentioned in our website, www.wereurope.org, all federations, big-small, rich-poor, strong-weak, everybody, will get benefit from the strong, positive wind we bring to European Chess.

Silvio Danailov: Yes, the letter of Naiditch is with great sense of humor, but in reality this is very sad story. However, I hope that the situation in German chess will improve in the future.