Note: The text translation is copyright of Chessdom.com, closest possible to the original. We publish also the originals, just as the letter with Anand, in order to avoid misunderstandings. All development of the story with timeline here

Statement of the organizing committee

In relation to the letters of the World Chess Champion V. Anand and the Indian Chess Federation spread through the media, in which they request the match for the world title in chess 2010 to be postponed with 3 days, we have to state the following:

* During her visit in Sofia from 8 to 12 February 2010, Mrs. Aruna Anand, wife and manager of the world champion, reserved two apartments and 4 rooms in “Hilton” Sofia from 15th of April until 14th of May 2010. These were paid for in a timely manner by the Organizing Committee and are at the disposal of the team of V. Anand. On the 15th of April Mr. Hans-Walter Schmitt, member of the team of V.Anand checked in the hotel in Sofia and took the keys of all rooms designated for the delegation of the World Champion. From this follows, that Mr. Anand and his team have checked in the hotel.

According to the Contract (art. 8 “Privileges of the players”), FIDE asks from the organizers to give them, with their good disposition, 7 (seven) days before the beginning of the match for getting accustomed to the new location. This privilege the player uses depending on his judgment. According to the contract, the player is obliged to be present at the mandatory press conference before the inauguration of the game, which is scheduled for the 21st of April this year.

* On the 15th of April this year the Organizing Committee of the match asked in writing Mrs. Anand about the time and number of the flight that will carry the delegation of the world champion, so they can be greeted as it is accustomed, the same way all World Champions have been greeted upon their arrival in Bulgaria. Up until that moment Mrs. Anand had always answered all letters sent to her correctly and in a timely manner. This time there was no answer. A written request to the FIDE Central in Athens was sent immediately, and the answer received was the following: “Mrs. Anand is probably in an airplane and has switched off her cell phone.” The organizers and the journalists in Bulgaria were bitterly disappointed of the attitude of the world champion V.Anand, but we accepted it as a part of the “playing on the nerves game”.

* For the fact, that Mr. Anand could not arrive on time in Sofia, the organizers bear no fault. The fault is to be placed on him and his team. Even more, according to art.11.2 from the contract (on which Mr. Anand is placing his statements) “If one of the parties meets an obstacle in fulfilling one of the parties duties according to this Contract due to a Force Majeure occurance, this party should, at the first reasonable possibility, inform the rest of the parties for the nature and span of the circumstances that caused the Force Majeure occurance.” The organizational Committee, as well as the team of V. Topalov up to 11:00h at the 18th of April 2010, was not aware of the troubles of Mr. V. Anand. For those we learned first from the press and then from the supervisor of the match, Mr. G Makropoulus.

* According to art. 11.3 from the contract, the party, which states that due to a Force Majeure situation had made impossible or has delayed the fulfillment of one of the party’s duties according to this contract, should use all available means to put an end to the fmajore situation and to find a solution that allows the fulfillment of the contract at hand. If the organizing committee was informed, in a timely manner, for the problem with the arrival of Mr. Anand and his team, we would have given him full assistance to resolve the problematic situation.

We understand the problem of Mr. Anand, but we are bitterly disappointed by his derogatory actions and attitude towards the organizers. All problems that emerge should be resolved in dialogue with shown understanding from all sides, and not in the form of pressure.

As much as we are aware, there is no official sports event (World or European championship) that has been postponed due to the inability of one of the teams (players) to arrive on time. The party that does not show up carries the sanctions accordingly. For your information, for the last games the Champions League in Football, every team should find a way to be present on time for the given competition. In the given case, if Mr. Anand had used the alternative means of transportation between Frankfurt and Sofia (train, bus, private car, etc.), he would have arrived to the latest 6 (six) days before the start of the first game, scheduled for April 23rd, which is enough time for getting accustomed and rest.

Postponing the match will result in losses of tens of thousands euro for the organizers, the disturbance of the schedules of politicians, sponsors and official figures taking part in the event, the obstruction of contracts with the television and other media and many inconveniences for the numerous international guests, who have already reserved their accommodation in Sofia.

Therefore, we consider the request for postponing the game as unacceptable.

Note: The text translation is copyright of Chessdom.com, closest possible to the original. We publish also the originals, just as the letter with Anand, in order to avoid misunderstandings. 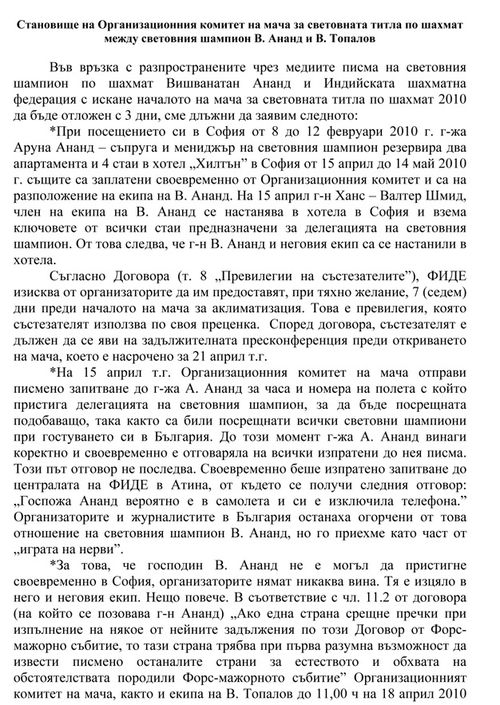 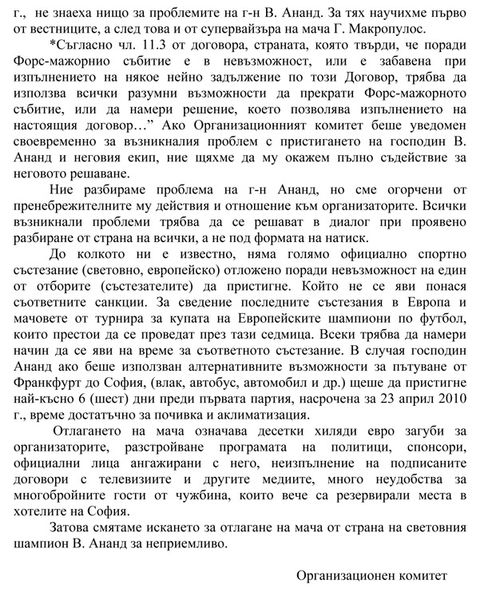